How I Accidentally Made a Grilled Peach-Infused Cheese Ball

Most cooking mistakes generally end up with burnt, bland, or otherwise inedible food, the occasional smoke alarm triggered, windows open to let in some fresh air, the glare of neighbors and, just once in a while, the arrival of the Fire Department who, mockingly, compliment you on your chef-like expertise in the kitchen.  Very rarely does a culinary mistake turns into something new, strange, or wondrous.

So you might imagine any number of scenarios – all ending badly for me – when I tell you that I set out to make grilled peaches in cream to go along with breakfast.  Fast-forward to peaches charring to cinders!  To milk boiling over and burning on the stove!  To a misplaced knife slice severing fingers and sending me rushing to the hospital!  To third degree burns!  To destruction, death, and the zombie apocalypse…

What you will not imagine, however, is that my peaches and cream experiment detoured and transmogrified into a small ball of grilled peach flavored cheese.  Or perhaps you did imagine that, given the leading title of this story.

Repeat for emphasis: peaches and cream transmogrified into a small cheese ball infused with the flavor of grilled peaches. This is no joke, and no miracle – this is (accidental) chemistry.

In the Beginning, Fire!

The origins of this story begin, like so many of our myths, with fire.  Specifically, a wood charcoal grill, the briquettes a nice hot orange, the night before the cheese ball incident.  One peach, just one, lonely peach, slathered in vegetable oil (alas, no bacon fat!), its juices caramelizing, its skin blistering…

Actually, the story begins earlier than that, in the morning, at the Ballard Farmers Market, whereat a fruit vendor casually mentioned that “people were grilling peaches this time of year.”  My wife and I had already been planning to barbecue in the evening – so it seemed like a perfect idea – buy a few fresh-picked Washington peaches (sorry, but I can’t remember the variety), throw one on the grill to see what happens, and (fingers-crossed) eat it as desert.

And grill that one peach we did – halved and pitted, coated in vegetable oil – until nice charred grill lines crisscrossed its surface and its skin was charred and bubbling.  But eat it for dessert, do that we did not.

The suspects: two grilled peach halves, a partially used carton of whole milk, and a jar of fireweed honey.

I began to simmer the milk with a few tablespoons of honey in a small saucepan, allowing the honey to dissolve, slowly bringing it to a simmer. Since this was whole milk, I was hoping to let it reduce down for a while and, hopefully, thicken up.

Meanwhile, I retrieved the (cold) peaches from the refrigerator and sliced them up.  So far, nothing strange had happened.

Five, maybe ten (fifteen?) minutes passed, and the milk and honey seemed to have thickened a bit, some of the liquid boiled off.  Time to put the peach slices into the saucepan to allow them to warm up and also to diffuse their sugary juices.  I did mention the peach was cold, right?  And that it had also been grilled – parts of it caramelized – the night before?

Into the saucepan the peaches went.  And then – no, not magic, not a miracle, but chemistry – the honey and milk immediately curdled, forming distinct chunks while the peach slices languished in their juices and the now-liberated whey.  An odd and none-too-appetizing sight, of which I failed to take a picture (I was not originally intending to write about the making of this now abortive dessert).  Peaches and cream we were most definitely not having, as there was no longer anything resembling cream, but instead small clumps of a pastel-pink-white cottage cheese looking substance floating in a soup of peach juice and whey, among original slices.

At this point, any lesser man would have thrown up his arms in disgust, tossing the saucepan into the sink, and storming out to the nearest diner to fume over a plate of over-easy eggs and a weak cup of coffee.  I, however, chose not to less this little unexpected mishap ruin things.  In fact, it seemed to me that it might be possible to salvage most of the experiment.

The peach slices were intact, and didn’t appear at all to be harmed.  I cut the heat and fished them out of the saucepan and into a bowl, setting them aside.  Perfectly edible.   A little bit of honey and my wife and I had breakfast again (a lactose free version).

Turning my attention back to the soup of juice and curds, and recalling numerous Food Network and Travel Channel episodes that involved cheese making, Anthony Bourdain, and/or Alton Brown, I thought there might just be a chance here.  Obviously something with the setup had cause the proteins in the milk to react, leaving me with these pinkish chunks.  I tasted one, to verify its edibility, and it turned out not to be too bad at all – like a mild fresh farmers cheese infused with, well, grilled peach.

Spreading some cheesecloth over a small Tupperware, I strained out the curds, then wrapped and squeezed as much moisture from them as I could, yielding a resultant glob of curd approximately the same volume as a ping-pong ball.  This I refrigerated for later consumption.

The leftover juice-whey combination – that I discarded after one taste. 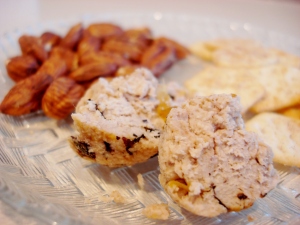 We sampled the cheese ball later in the day with gorgonzola crackers and hazelnuts.  Not too bad, certainly edible, and definitely flavored of the season.  For a cheese, of course, it could have been a lot better, but for an accidental creation, it wasn’t bad at all.

Hold Up – What Just Happened?

Well, chemistry happened.  Something about the peach slices caused the milk and honey to turn into sweet curds and whey.  Being that I am not a chemist, though, I can’t really explain for sure.  My best guess is that the acidity of the grilled peach slices, and the altered sugar structure from the caramelization, reacted with the chemical structure of the combined milk and honey mixture.  It’s also possible that the extreme temperature difference came into play, as the peach slices were just above refrigerator temperature and the milk was at a simmer/boil.

I am not, however, Alton Brown, with a Food Network budget and some research interns to help him out, so I am sticking to my vague and somewhat unsatisfying explanation until I have the time to refine it.  If  anybody out there knows, though, please drop me a line.