After making the fig, ricotta, honey, and toasted pecan dish I blogged about last month, I had a number of figs left over. I decided to quarter them and throw them into a quart pickle jar (sterilized in boiling water), then pour in a good amount of Buffalo Trace bourbon, to see how an infusion would come out. After sitting on the liquor cabinet for three weeks, I poured the liquid through a strainer into a large bowl to remove the fruit and any seeds or chunks that might have broken off during the infusion process. Then I put it back into the original jar for storage. Definitely darker and richer, you could smell fig aroma in the vapors, mixed pleasantly with the slightly sweet whiskey scent. We made a few Manhattans with this stuff later in the evening (not pictured) over at my cousin’s place, where he generously donated his vermouth and black walnut bitters. Turned out we probably didn’t need the bitters – the fig bourbon already had a strong fruit/herb flavor that could have easily stood on its own. 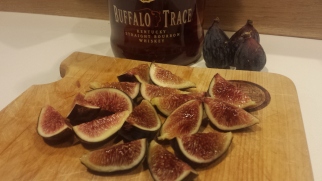 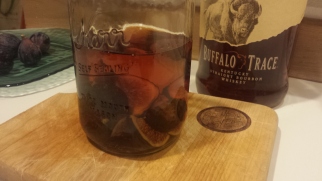